Yellow birds migrate south for a warmer winter after the breeding season in the north. Other yellow-colored birds make Florida their permanent home year-round. This means that it’s possible to spot various kinds of yellow birds seen during different seasons of the year.

Discover 15 common yellow birds that you can spot in Florida during the summer or even year-round in the state.

You also don’t want to miss these other similar posts: 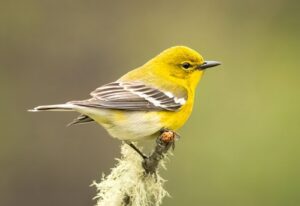 These chick-yellow songbirds made their home in Florida year-round, but it’s more common to spot them in the southern parts of the state during the winter.

With plump yellow bodies, white underbellies, and olive-colored backs topped with gray bars across the wings, the male is the brighter one of the species. A female Pine Warbler has more brown-yellow plumage and whiter belly feathers.

These fluffy little birds get their name from the pine forests where they roost and nest high up in the tree canopy. They spend their time in pine forests catching beetles, spiders, caterpillars, and insects or scavenging for seeds and berries during the colder months.

Attract Pine Warbler populations into your backyard by putting up platform or tube feeders filled with cracked corn, sunflower seeds, millet, shelled peanuts, and suet. Since Pine Warblers are one of the rare warblers that consume mostly seeds, this is a good way to draw this yellow bird to your yard. Pine Warbles also enjoy spaces filled with indigenous vines and fruits like grape, sumac, bayberry, and Virginia Creeper. 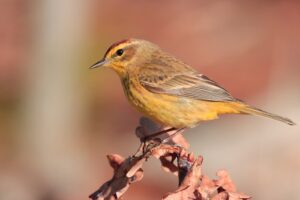 Winter is a popular time to spot the Palm Warbler in Florida. They breed in Canada, migrate throughout the eastern states year-round, and are common throughout the year in southern Florida.

Due to its rusty-red patch that tops its head above a yellow belly and olive-brown wings, this bird stands out during the winter months.

They live in bods, weedy fields, scrub woods, and boreal forests in Florida where you can spot them walking around on the ground, their tails bobbing in a distinctive way as they hunt for insects. They are often seen in the company of Juncos, Sparrows, and Yellow-Rumped Warblers.

Draw these pretty songbirds to your yard by planting hawthorn or bayberry plants to offer the red berries that these birds enjoy. 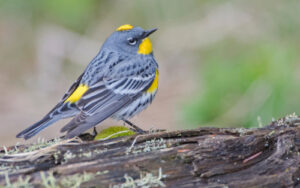 These striking birds migrate to Florida during September and can stay in the state until May. The months of October through April are the best times of year to see them.

These sporty birds spend their time in coniferous forests or more open areas where they can forage for fruits from shrubs in winter.

You can spot these birds in your backyard by luring them with feeders filled with suet, raisins, peanut butter, and sunflower seeds. 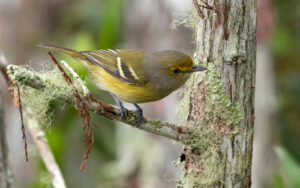 It’s easiest to spot this beautiful little yellow bird from March to October, but it’s possible to see them in Florida during the entire year.

With gray heads and white rings around yellow eye patches, the White-Eyed Vireo has a soft, yellowish-brown body, shades of green on its back, and sharp, double-white bars across darker wings. Male birds will serenade the world from the crack of dawn until noon during spring and summer.

White-Eyed Vireos hang out in tangled thickets, overgrown pastures, and wetland thickets where they feed on flies, spiders, lacewings, and other insects. They also enjoy consuming local berries.

You may see these birds in your backyard if you have a lot of native berry plants during winter. 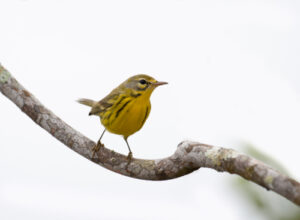 The Prairie Warbler is one of several yellow birds visible in northern Florida during nesting season and across the state during the winter. Florida flock numbers swell during March-April migrations and again in September-October.

These small, lovely songbirds have olive-green backs and flecks of brown on yellow throats and bellies. They also sport black side streaks with a dark crescent under their eyes. Like many species, the females have duller plumage than their male counterparts.

Despite their name, these birds make their home in forests and fields where they hunt for spiders, snails, and other kinds of insects. They tend to move in a bobbing fashion along branches when they scout for food.

They are also identified by their distinctive, rising tune that the male sings in two different ways. One song is to woo female birds while the second song is an aggressive warning to scare off other males. 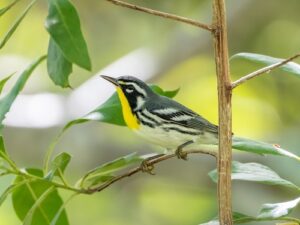 Some Yellow-Throated Warblers stay in southern Florida just during the winter, while others might linger year-round. It’s most common to see them during the September-October fall migration timeframe.

With distinctive, bright yellow throats, white bellies, and undersides of tails, these birds also have gray bodies with black flecks on the breast.

You can spot Yellow-Throated Warblers sitting on the tops of the pine trees scanning for insects. They are also known to hunt for food in lower branches when numbers increase during migration months.

These birds are one of the few species whose numbers have grown in recent years. You can make your yard friendly for Yellow-Throated Warblers by having native plants in wild areas of your backyard. 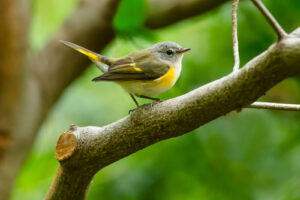 American Redstarts are mainly spotted in Florida during the migration from April to May and August to October. However, some do spend winter in the south of the state. They are recorded in 1% of winter checklists and up to 27% of checklists during fall migrations.

Female birds have olive-gray heads and wings, grayish-white bellies, and bright yellow patches on their upper breast under the wing line and yellow wing bars.

These birds hang out in thickets and open, deciduous woods without thick understory. They aren’t attracted to bird feeders but come to backyards that contain plants like magnolia and serviceberry to forage for berries. 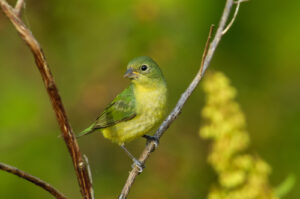 While a bright rainbow patchwork of color characterizes male Painted Buntings, a Female Painted Bunting departs this color scheme as one of Florida’s popular yellow birds. You can identify females by their vivid yellow-green feathers.

They are found in partly open spaces where they spend their time foraging for insects and seeds.

Attract these pretty yellow birds to your yard by providing dense vegetation for hiding and bird feeders filled with black sunflower seeds or white millet grains. 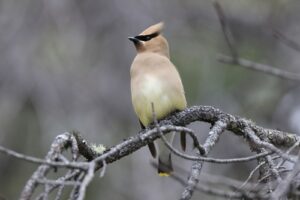 Social, elegant, and fluffy, these birds have extra-sleek pale brown heads, chests, and crest feathers. They have a light-yellow belly and a bright yellow-tipped tail. Their slim black eye mask is offset by bright crimson wingtips.

A Cedar Waxwing’s diet consists mainly of fruit year-round, but they do consume insects during summertime. These birds roost in berry bushes and thickets in woods, open grassland, and near streams. They’re even spotted in towns during winter months.

If you want to birdwatch for Cedar Waxwings, you can attract them to your yard by planting small fruit trees or native Florida shrubs. These include dogwood, juniper, winterberry, serviceberry, and hawthorn. Cedar Waxwings also enjoy fruit provided in platform bird feeders. 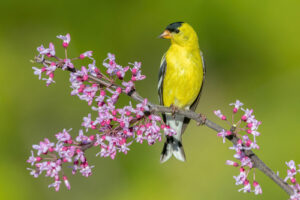 American Goldfinches are mainly spotted during winter in Florida, from November to April. They are recorded in 8% of winter checklists for the state.

This yellow bird is a popular sight throughout Florida due to the male’s stunning yellow and black spring plumage. Females have duller brown feathers, while males transform into muted tones during the winter.

They frequent scrubby and weedy fields that contain thistle, aster, and sunflower plants. You can also spot them foraging in suburban areas such as backyards and parks.

You can find American Goldfinches in weedy fields and overgrown areas foraging for sunflower, thistle, and aster plants. They are also common in suburbs, parks, and backyards. 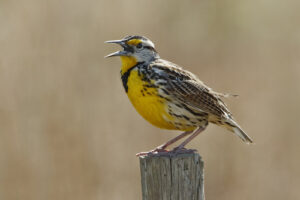 This near-endangered species of songbird has a medium-sized body with bright yellow underparts and pale brown back marked with black flecks. The black band across their chest makes it easier to identify these birds.

Unfortunately, they’ve reached a threatened class due to the loss or quality deterioration of their prairie habitats. In winter, larger flocks are seen foraging for seeds in open spaces. 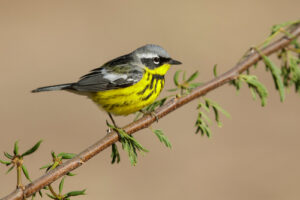 These distinctive birds are usually spotted in the state during spring and fall migration times, but some choose to winter over in parts of southern Florida.

Male Magnolia Warblers have striking black streaks across their bellies. They also have black backs and black necklaces. Female birds have grayer backs and don’t display such sharp black-on-yellow streaks.

They love to bob on lower branches in parks and forests while they look for caterpillars, spiders, and other insects. This makes it easier to see and identify them.

You can also draw these birds to your backyard during migration seasons by planting a lot of native Florida shrubs and trees. 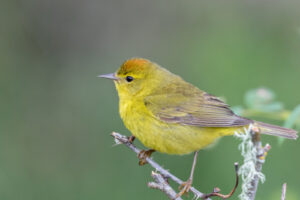 Visible during winter in Florida, the best time to birdwatch for an Orange-Crowned Warbler is from November to March. At the same time, they are rarer birds to spot.

While they don’t have such bright coloring as other types of warblers, they have yellow-olive plumage and an orange crown that is hard to see.

They spend their time in low-growing vegetation and deciduous shrubs that are bare in winter. Their diet centers around spiders, flies, and caterpillars, but they will also consume berries, fruit, and seeds. Orange-Crowned Warblers are fond of coming to backyard feeders filled with peanut butter or suet and enjoy sugar water nectar in hummingbird feeders. 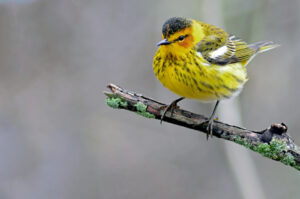 These beautiful songbirds live a double life like many species, leaving Florida in April and May to nest in far northern forests, and then winging their way south during September and October to live out the winter in a warmer climate.

You can identify male birds by their dark caps, rich chestnut-brown cheeks, and yellow neck rings. Their underbelly is tiger-striped with yellow and dark streaks, while they have mottled olive-yellow backs and wings.

During migration, they are found in many habitats that border scrub trees and woods where they forage for worms, fruit, and other nectar with their tube-shaped tongues. They are also attracted to backyard hummingbird feeders. 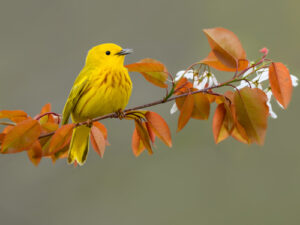 The final popular yellow bird on the list of common Florida birds is the Yellow Warbler. They are fun and easy to spot during August-October migration times. They’re also seen across the state when they migrate north from April to May.

Bright yellow bodies with yellow-green-colored backs distinguish these spunky little birds. Like many species, females and young birds have duller colors, while only adult males sport chestnut streaks on their chests.

You may notice this bird in wetlands, thickets, field edges, and streams. They often hunt for insects like beetles, wasps, midges, caterpillars, and other bugs in these locations.

Attract these yellow birds into your yard by planting pesticide-free berry plants and installing secluded bird baths or fountains. Fill feeders with oranges, suet, and tasty peanut butter to bring Yellow Warblers flocking to your door for happy birdwatching.

Yellow birds are a common sight in Florida. From warblers and waxwings to finches and buntings, these birds are either partially or mostly yellow-colored.

This guide will help you identify interesting yellow birds in this state the next time you spot one.