From shrimp pink feathers and rosy crests to blush-tinted plumage, pink-colored are rarer on the East Coast than in the American West. Many of these birds are either coastal birds or vagrant visitors to Florida.

Popular birds with pink feathers in Florida include several different kinds of flamingoes, finches, female or juvenile cardinals and tanagers, and even hummingbirds.

Discover and identify a common sight or a rare glimpse of these 15 pink-colored vagrant visitors or year-round residents in Florida. 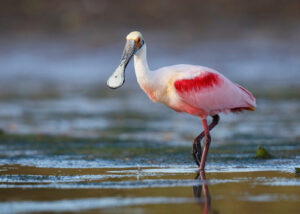 Many people associate Florida with large pink birds, but the Roseate Spoonbill is the only big pink bird that is completely indigenous to North America.

These unique birds have long legs like a stork for wading in shallow water. They are easily identified by their white backs, a mix of pale pink and hot pink body feathers, red eyes, pastel yellow and grayish-blue heads, and long, spoon-shaped bills.

An adult Roseate Spoonbill’s plumage is a variety of bright or light pink because feather shades can shift depending on its diet. When a Roseate Spoonbill consumes more shrimp, the carotenoid compounds in shrimp dye its feathers a deeper pink from the inside out.

You can spot these gorgeous birds feeding on shrimp and other seafood in the wild in shallow saltwater areas, and salt flats, and throughout the Everglades. 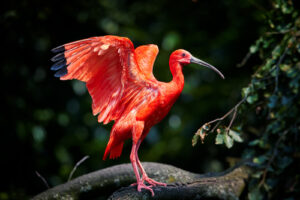 This bird is considered a vagrant or an accidental avian traveler that doesn’t live in or normally migrate to Florida or the U.S.  While it isn’t indigenous to North America, birds imported from tropical climates in South America and the Caribbean islands, bred with the American White Ibis to create a hybrid pink bird.

Sometimes a Scarlet Ibis will escape from an aviary, zoo, or park like Tampa’s Busch Gardens and make its way into the wild, which is the only time that you will spot a Scarlet Ibis in Florida outside of captivity.

A Scarlet Ibis is a bright pink or scarlet bird (a hybrid will look pink rather than red) with black tips on its wings. Although the Scarlet Ibis and the American White Ibis are known to breed with each other, they are considered separate species.

The best place to see a Scarlet Ibis in Florida is in a zoo or aviary. There have been scattered sightings of vagrant scarlet or pink ibis hybrids in Florida in the wild after Scarlet and White Ibis birds escaped the confines of a breeding program back in the 1970s. If you’re lucky, you may spot this extremely rare bird in the wild once in your lifetime. 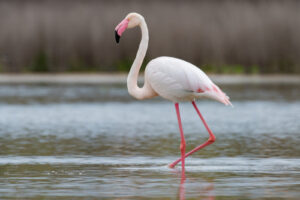 A vibrant transplant from the Bahamas, the Greater Flamingo is one of the most popular birds you might spot in Florida.

These birds get their signature rosy pink hue from the shrimp that they catch and eat. They have long legs, webbed feet, an s-shaped neck, and a black-tipped beak bent at a 45-degree angle for easier fishing.

Flamingos use their distinctive, curved bill to hunt for plankton, aquatic plants, algae, small fish, worms, larvae, crustaceans, and small-sized mollusks in shallow waters near coasts. Greater Flamingos are usually the only tall, pink-colored bird that you’ll see in any one area in the state. 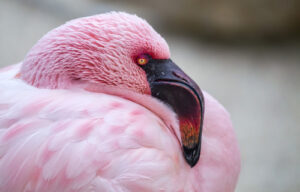 The Lesser Flamingo is the smallest existing flamingo in the world. As its name suggests, it is smaller than other flamingo species.

This is one of the brightest birds in the Flamingo species. It has a dark-colored bill, red legs, and bright red eyes in adult birds. Young birds have more grayish-brown feathers that look darker than juvenile Greater Flamingos.

They live in coastal lagoons and alkaline, freshwater lakes where they flock in large numbers to consume a specific diet of blue-green-colored microscopic algae. Their migration and breeding season shift in response to environmental changes. During the breeding season, this species retreats to remote salt-flat areas that are protected from predators.

If you want to view them in the wild, one of the best places to see flocks of these small pink waterbirds is in the Everglades 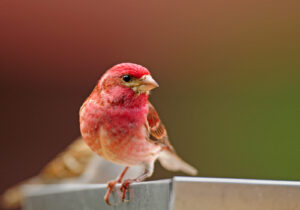 This sporty bird is one of the smaller pink birds visible in the state. Despite the name, adult males have pale red washes on their feathers that fade in color from a raspberry crest to pinkish feathers on their throats and breasts. Their back and wings have a deeper, wintry pinkish-red color.

Unlike many species, females and immature males are brighter and more colorful than adult male Purple Finches.

While many pink finch habitats lie in the American West and towards the far north closer to the Arctic Circle, the Purple is a visitor to Florida. It frequents mixed deciduous and conifer or fully coniferous forests. You can also put out seeds since these birds visit backyard feeders during the winter. 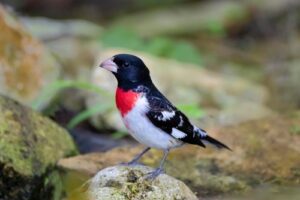 While these female birds can look dull in contrast to adult males who show off a bold red triangle on their black and white breasts, the females of the species have thick, blunt pale-pinkish mauve beaks. In contrast to Purple Finches, these birds are bigger, have pink bills, and have more distinct white wing markings.

These birds are popular in the eastern U.S., including Florida’s deciduous forests where they enjoy a varied diet of foraged caterpillars, beetles, grasshoppers, spiders, snails, and buds of flowers. 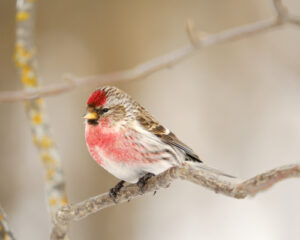 Due to their penchant for colder climates, these small finches are only vagrant visitors to Florida. This means that they don’t always migrate for breeding or wintering purposes but instead end up in the state by accident. During some years, Common Redpoll populations may migrate further south from their tundra habitats.

These petite birds have round, fluffy bodies, long, forked tails, and tiny yellow beaks. Adult males also have a pinkish blush across their breasts and front belly feathers. They have a ringing call that echoes well across empty winter landscapes. 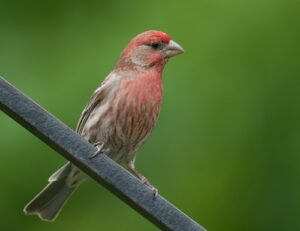 You may notice adult male House Finches with fading pinkish-red washes on heads and chests flitting around suburban lawns or backyards, open woods, and brushy pastures. Females have duller gray-brown feathers and blurred streaks on their undersides.

House Finches are known for their loud songs and fondness for visiting backyard feeders to enjoy a variety of sunflower seeds, berries, and other birdseed. 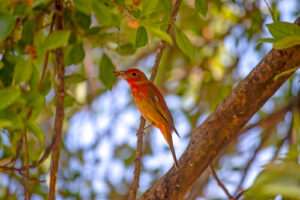 It’s the only completely strawberry-red bird on the North American continent. While adult male birds have grown into an eye-catching crimson shade, a young male Summer Tanager won’t have grown into his full color yet. Females are a mustard-yellow color, but immature males have a pinker color.

Both males and females emit a unique, muttering, chuckling sound. They are also known to migrate as far south as Florida and central South America every winter. Year-round, they spend their time snatching flying bees and wasps or plucking berries from bushes and fruit trees in a deciduous forest habitat. 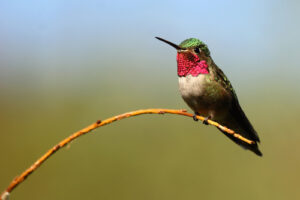 Indigenous to mountain meadows at high elevations, the Broad-Tailed Hummingbird is an accidental vagrant that is rare to spot in Florida. The males give loud, metallic-sounding trills when they fly which, along with the glowing shimmer of pink throat feathers, can help identify them.

These birds are attracted to sugar water or nectarous native plants and spend their time in conifer forests, scrub, and at backyard feeders. 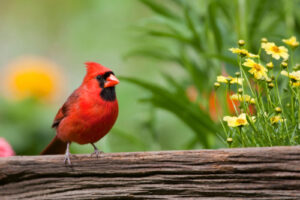 Known for their vibrant red color, male Northern Cardinals, their mates, and their offspring are commonly found in many states, including Florida, east of the Rocky Mountains. Unlike a male bird’s eye-catching shade of red, female Northern Cardinals have a brown body with a perky crest and rosy pink-red accent feathers.

It’s easy to identify this bird, especially in the winter, since they don’t migrate north or shed their feathers for duller colors during the cold months. You can spot them in scrubby areas, forests, and even picking up sunflower seeds in your backyard or garden. 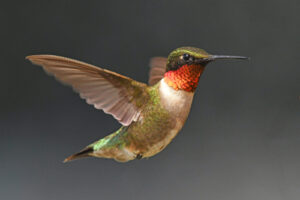 A flash of ruby and green jewel tones may mean that you’ve spotted a Ruby-Throated Hummingbird.

These tiny birds’ bodies shimmer like emeralds and rubies due to the wash of glittering reddish-pink color across their throats. During the summer, they may visit hummingbird feeders and gardens to sip sugar water or nectar. By autumn, they set off across the Gulf of Mexico, bound for large open spaces in Central America. 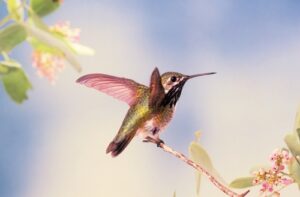 Cute as a button and about the size of a ping-pong ball, the Calliope Hummingbird brings a festive circus of color to Florida pine woods, meadows, and streamside thickets.

The Calliope Hummingbird measures only 3 inches, making it the smallest bird to live in North America. This tiny bird has a moss-green head, white chest, darker wing feathers, and hot pink jewel tones on its throat.

It spends its time in wild spaces, sipping nectar from flower buds and swallowing little insects. You are more likely to see this tiny avian visitor in your backyard if you have ground cover or creeping flowers that grow close to the ground.

It’s easy to identify it by its coloring and hummingbird behavior since it hovers in the air, beating its wings while feeding. It sticks its sharp narrow bill into the flower’s heart to extract fresh nectar. The Calliope Hummingbird is especially attracted to sugar-water nectar put out in hummingbird feeders. 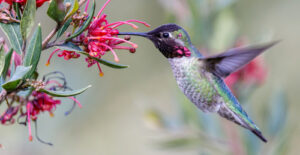 A delicate, accidental traveler to Florida, these minute birds, named after a nineteenth-century French courtier, Anna Masséna, Countess Rivoli, are considered vagrant birds in the state.

Tiny, colorful, and lightning-fast, Anna’s Hummingbird sports iridescent bronze-green feathers along its back, a light gray chest and belly, darker wings, head, dark, notched tail, emerald flanks, and slender, needle-like beak. When their striking, jewel-pink georgette catches the sunlight, the reflected color makes them one of the most spectacular pink birds to spot in Florida.

Solitary, restless, and territorial, these birds tend to stay residents in their western coastal states. At the same time, they have also migrated out of their usual zones to diverse places as far as southern Alaska, New York, Louisiana, and Florida.

During the day, these tiny birds stay busy extracting flower nectar with their extendable tongues. Although they keep to themselves, they also visit city parks and backyards that have sugar water feeders or flowering plants. 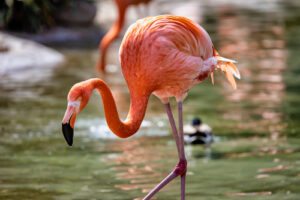 A final pink bird in Florida, the American Flamingo is originally a Bahamian transplant that is also a vagrant in the state.

While it’s more common to see these birds in parks, zoos, or Disney locations, it’s possible to find them in low saltwater spots, salt flats, or in the secluded Everglades. Like the Greater Flamingo and the Lesser Flamingo, a diet of shrimp, plus algae, plankton, insects, and crustaceans, help give the American Flamingo its distinctive rosy pink color.

If you’re lucky enough to glimpse Flamingos in the wild, you may notice them standing motionless for hours on one leg, either sleeping, drying out the opposite leg, or pretending to be a plant to hide from possible predators. These birds aren’t attracted to backyard feeders since they spend their time wading in shallow water to scout for aquatic plants and marine life.

While true pink birds are not often a common sight in Florida, it’s possible to see bright pink birds such as flamingos along coastlines or fishing in lagoons.

While many finches or redpolls make their home in far northern or western climates, each of these rarer birds has been sighted in Florida within the past decade. Some species may have roseate coloration bordering on red or purple depending on seasonal changes or a bird’s age or gender.

This guide will help you make a faster identification the next time that you see a pink bird that you don’t recognize in Florida.