A flash of blue in the trees or a glimpse of gray-blue plumage wading near water can mean that you’ve spotted one of Florida’s popular blue birds. Depending on the habitat, size, and identifying markings, you might have seen a Bluebird, a Blue Jay, a Blue-Winged Teal, or even a Great Blue Heron, and many more.

With three bluebird species (Eastern, Mountain, and Western varieties) frequently seen in the state, water birds, songbirds, and swallows, Florida is home to many amazing birds that are blue, partially blue, or contain iridescent blue feather shades. Unlike other bright-colored birds, blue birds don’t actually have blue-colored feathers. Instead, plumage structure and reflected light give these beautiful birds their signature blue look.

Check out these 15 popular blue birds in Florida to help you identify an interesting new blue bird with ease.

You also don’t want to miss: 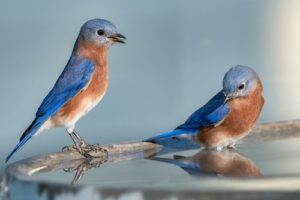 With a bright admiral blue head, wings, and tail above a rusty breast, it’s easy for these vivid birds to have a grayish color from a distance. Females have a grayish body, wings that have a bluish color, and rusty orange flanks and chests.

A year-round resident in northern and central Florida, these birds prefer to nest in holes and spaces where there aren’t a lot of people, houses, or dense trees.

You won’t see an Eastern Bluebird drawn to your backyard bird feeder unless you put out mealworms or provide a nesting box. The Eastern Bluebird is typically seen in open meadows, large, mowed fields, or scattered trees for perching.

During the summer, it eats ground insects such as crickets, caterpillars, and spiders. During the winter, it consumes berries and other available fruits. 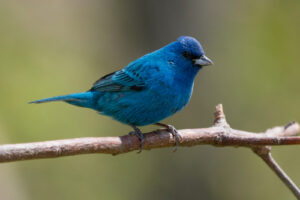 Deep indigo blue tipped with dark brown wings and tail makes the Indigo Bunting stand out from the Eastern Bluebird. Females and young birds are easier to spot with their creamy white bellies and pale brown washes on their wings. This finch species is considered the only bird with a full blue body color in the state.

You may notice bright male birds singing full blast from the treetops during the warm summer months. The Indigo Bunting is a migratory bird that is likely to be seen in Florida during the summer. Other places to find them are in fields, parks, gardens, and deciduous woods hunting for insects during the summer. In the winter and spring, it’s a frequent visitor to backyard feeders. 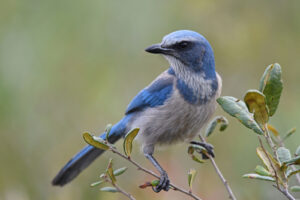 With cerulean blue feathers, a streaked, gray-brown throat, belly, and mantle, and a white head, the Scrub-Jay usually hops on the ground, scouting for berries, insects, seeds, and accords which they bury in the sandy soil for later food storage.

Often spotted in the scrubby Florida flatwoods that gives it its name, this popular blue bird is also a federally protected species in the state. The Florida Scrub-Jay is not found in any other part of the world outside of the piney flatwoods that border Florida swamplands.

They also tend to live in extended family groups where everyone has a job. Juvenile birds return each year to help their parents raise a new brood. Some family members hunt for food while others scan the skies for hawks and other predators.

Some of the best places to catch sight of protected Scrub-Jay populations are at the Merritt Island National Wildlife Refuge and the Archbold Biological Station. This rare bird continues to see declining population numbers due to the widespread erosion of its flatwoods habitat. 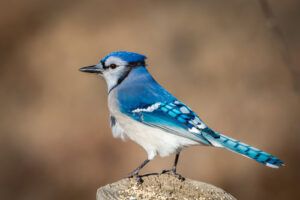 With a round head, arctic blue wings, and shades of black, gray, and white feathers, the Blue Jay lives in many places throughout the state except for the south Florida area.

As opportunistic omnivores, the Florida Jay eats nuts, insects, small, dead vertebrates, and sometimes eggs and baby birds stolen from other birds’ nests. These birds love to feet in backyard suet feeders, and trays or hoppers filled with peanuts or sunflower seeds.

Known for their noisy cries, these birds live in small group colonies that contains a dominant pair of Jays and a handful of other subordinate birds. They are also often seen sitting on bridges, buildings, and telephone poles to scout and swoop down for food. 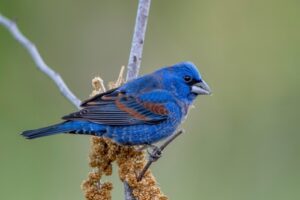 A sunny summer visitor, the Blue Grosbeak tends to nest north of Lake Okeechobee, but will sometimes linger in the state through the winter.

The males, which are conspicuous for their bold singing calls, have rich blue feathers with chestnut bars across their wings. In contrast female Blue Grosbeaks have a pale underbelly with warm cinnamon brown plumage. Both males and female songbirds sport a cone-shaped beak.

You may spot this bird in your backyard if you are surrounded by shrubbery and put out seeds and grains in your bird feeder. In the wild, Blue Grosbeaks eat seeds, crickets, grasshoppers, and snails. Grosbeak parents are thoughtful feeders and remove an insect’s head, wings, and legs, before feeding the meal to their nestlings.

The adult males are almost entirely dark blue in color, except for two chestnut-brown wingbars and a black face. 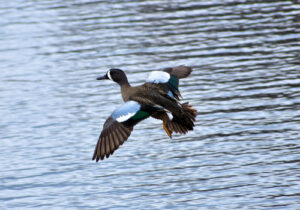 This rare bird is hard to spot in the state’s slow, inland bodies of water. If you’re lucky enough to catch sight of this bird, it can be identified by a blue head, body feathers speckled with brown, and a white crescent marking behind its bill. Adult male birds have powder-blue fronts of wings and deep green rear wingtips that are more noticeable when they fly.

Look for these birds in Florida during the winter, since in summer they migrate north to Canada and northern US states. 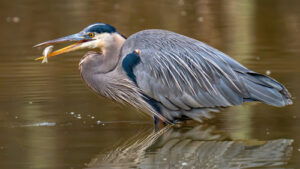 The Great Blue Heron looks misty gray-blue hue when spotted from a distance in Florida’s marshes, wetlands, coastlines, and lakes during the winter. It stands still as a statue as it waits to stab fish, reptiles, amphibians, or smaller birds and rodents with its long, yellow-colored bill.

This bird isn’t a backyard visitor unless you offer them access to a fishpond. If you live near a Great Heron habitat, you can make your space more welcoming by setting up a nesting platform on your property.

You can birdwatch for the Great Blue Heron or watch them fish in calm freshwater places, shallow bays on the coast, or rivers with water that moves slow. Their nests are typically found in shrubs or trees close to the water. 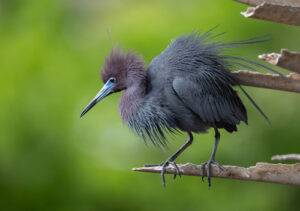 Like it’s bigger cousin, the Little Blue Heron also has gray-blue plumage. Up to a year old, juvenile birds have pure white feathers. You can tell them apart from other kinds of herons by checking for their dark green legs and bill.

In their aquatic habitat, Little Blue Herons wade through shallow water to feed on mollusks, small fish, crayfish, and other crustaceans.

While they are year-round Florida residents, their numbers swell during the winter as many birds that flew to the northern parts of the country migrate south for the winter. 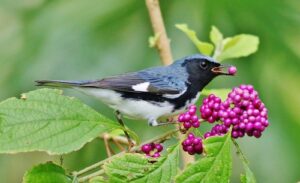 With a white underbelly, black wings, throat, and face patches, and midnight-blue feathers divided by a sharp black line, the Black-Throated Blue Warbler is a small songbird that is active in Florida during spring and fall migratory seasons. In contrast to other Warbler species, this bird doesn’t molt in autumn, so you can enjoy its beautiful plumage year-round.

You won’t spot this bird hanging out in the treetops much since it prefers to pluck insects, spiders, and flues from the undersides of leaves closer to the ground. It also enjoys a diet of seeds or berries during the winter. 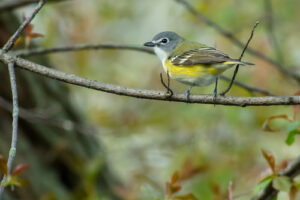 This summer-time bird has mossy-green plumage, a blue-gray hood on its head, and thick white rings around the eyes. Both male and female birds look very similar. Mature birds have an olive-green-colored back, dark wings, and a white throat.

It hangs out in the upper canopy of old forests as it walks from branch-to-branch hunting for insects. While this bird isn’t a frequent visitor to backyard feeders, it enjoys yards or gardens with hedgerows.

Population numbers tend to swell during the winter due to an influx of migration from the north. 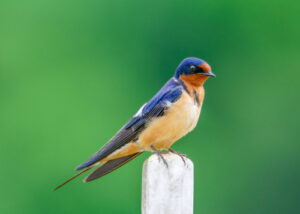 A Barn Swallow has iridescent, shimmering dark blue feathers when caught by the sun. Below its wings, this bird sports a light, red-orange belly, chest-nut orange washes on its throat and forehead. It is easy to identify by its long, forked tail. Young Barn Swallows have shorter tails and duller feathers.

These birds are aerial feeders who swoop lower to the ground to catch flying insects like flies or mosquitoes. During the winter, they often add termites to their diet.

Mostly found in barns, bridges, building eaves, hollow trees, and caves, this bird has declined in numbers due to reduced nesting spaces and foraging habitats. 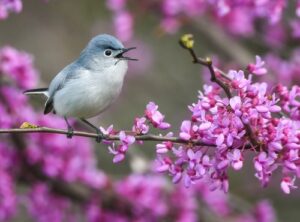 Similar in looks to a warbler, the Blue-Gray Gnatcatcher is distinguished by its long tail with an upward tilt. Adult males have blue-gray upper plumage and paler gray stomachs, while their tail is black with a white stripe at the edges. Females and young birds have grayish top feathers and light gray bellies. Both males and females have white rings around the eyes.

This tiny bird is a year-round resident in the state of Florida. It’s also known to fly fast as it hunts insects, darting its tail from side to side to scare insects into its beak.

A pair of Blue-Gray Gnatcatchers might build as many as seven nests each season, using materials from old nests to create a new one. 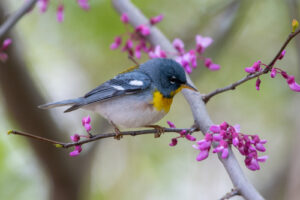 This blue wood warbler has blue feathers, a distinct patch of yellow green on its back, and white bars across its wings (males). They also have an orange band across the chest, a vibrant yellow throat, and partial white rings around the eyes.

Often seen in mixed and deciduous woodlands near water, the Northern Parula enjoys a variety of insects including caterpillars, spiders, ants, bees, locusts, wasps, and moths during the summer. 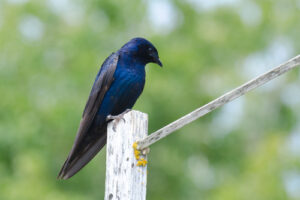 As the largest martin on the North American continent, the Purple Martin is a migratory bird that makes its home in Florida only during the warm summer months.

With deep, purple blue feathers set off by an iridescent sheen, the rest of a male bird’s tail and wings are black. Females and young birds look different since they have a beige white belly and pale gray upper body.

In the past, these striking blue birds nested in cavities in trees, but now prefer to roost in manmade, compartmentalized nesting boxes. Purple Martins prefer to nest in colonies, which can number up to dozens of pairs of birds.

Known for its aerial feeding skills, a Purple Martin enjoys a diet composed mainly of dragonflies. It also drinks by skimming the surface of the water while in flight.

If you want to attract these beautiful blue birds into your backyard, the best way to make them feel welcome is to put up a special Purple Martin house. 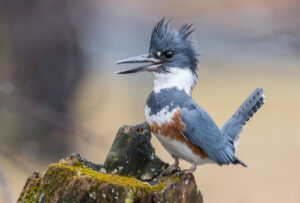 You can see this bird year-round in southern Florida near lakes and rivers where it dives headfirst for fish into the water.

While blue-colored birds aren’t that common, there are several popular species that are migratory travelers or year-round residents in Florida.

Many blue birds may look dark or gray from a distance. Grab a pair of binoculars next time you’re birdwatching in nature or your own backyard to check out some of these birds’ dazzling blue plumage.

This guide can help you identify an avian visitor next time you spot a cool blue bird in Florida.