Bird watching is an exciting pastime, especially in Michigan. This is because the landscape across the state is very suitable for many gorgeous feathered friends. There’s plenty of water, fields, vegetation and insects to keep them happy, healthy and thriving. While all birds are beautiful and interesting, black birds are some of the more fascinating.

We’ll discuss 15 popular black birds in Michigan. These will include the red-winged blackbird, the brown-headed cowbird, bobolinks, American crows, western meadowlarks and American coots, to name a few. You’ll learn about their scientific names, diets, habitats, lifespans, sizes, weights and wingspans along with other compelling information.

Since the list below only gives a brief synopsis of these birds, it’s advisable to do your own research at places like the Michigan Audubon Society or the Department of Natural Resources. There is so much to discover about each species listed, it wasn’t possible to discuss everything. 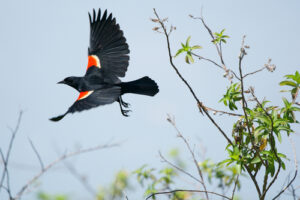 The red-winged blackbird is the most populous in Michigan. Males are all black with a patch of bright crimson on their wings. Juveniles and females are brownish black with white streaks.

In springtime, males arrive first to claim prime real estate for nesting. When the females arrive, the males sing from their perch, flaunting their red patch. Several females then decide on the same mate as they all build nests in thick vegetation above shallow water. 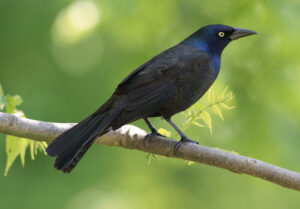 The common grackle appears entirely black from a distance but a closer inspection reveals a striking shimmery purple on the head, breast and neck. They have pointy, cone-like beaks and bright yellow eyes with a long wedge-shaped tail.

Common grackles inhabit open spaces in suburban and residential areas, often in parks, fields and meadows. During nesting, females build large fortresses and lay about five eggs. After two weeks, their hatchlings came into the world.

Common grackles are incredibly noisy when flocking and present problems for farmers. This is due to how they feed on viable grain and other crops. 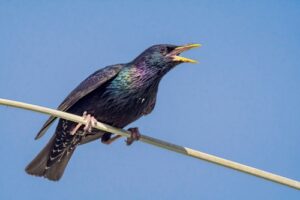 The most prolific black bird in Michigan is the European starling. Also called a common starling, they are uniformly black, have a glossy sheen and light spots. These aren’t from North America, they come from North Africa, Asia and Europe.

Common starlings take residence in open areas. However, they love urban parks, gardens and nature preserves in tree holes, buildings and boxes. Females lay up to five eggs and it takes about 15 days to hatch. Outside nesting, they create large flocks to engage in amazing displays of aerial acrobatics. 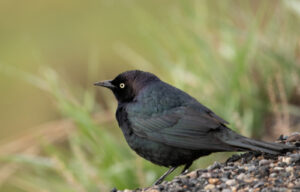 Rusty blackbird males are entirely black but juveniles and females are a grayish brown. However, during autumn, the males will change into a rusty and drab brown shade. It’s during this time of year they are easier to identify.

Rusty blackbirds migrate through Michigan in the spring and fall but a handful stay in winter. It’s not uncommon to spot a few from September into April. But, it’s interesting to note that these birds do not breed in Michigan. 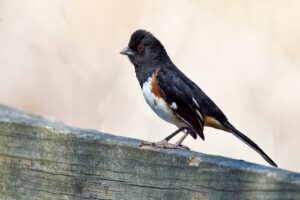 Eastern towhees live in southern Michigan throughout the year but it’s a summer migrant in the northern parts of the state. The name comes from the sound of their cry.

The males are very black with a white underneath and rusty brown sides. The white comma-shaped wing patches are apparent in flight. The eastern towhees in Michigan are distinctive due to their red eyes.

Females lay two to six eggs and incubate them for 12 to 13 days. Once hatched, the males provide most of the food. What’s remarkable is how these birds gather in flocks of mixed species outside mating season. 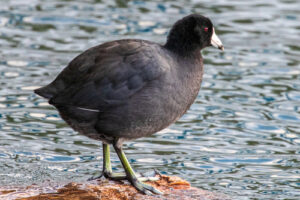 American coots are dark gray to black with red eyes along with white foreheads and beaks. They have small heads and thin legs too. Their lobed and broad toes allow for swimming, foraging and diving. A social bird, American coots congregate during migration in southern Michigan on open water.

Northern Michigan provides an excellent environment for nesting, where they build floating platforms anchored to nearby vegetation. Females lay eight to 12 eggs in one brood with a 23 to 25 day incubation period. 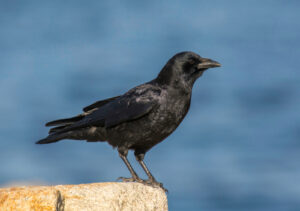 One of the easiest birds to identify is the American Crow and Michigan has no shortage of them. These are rather large black birds from their legs up to their eyes. Their intelligence is legendary, mostly due to its social nature.

Families sleep together at night but separate for foraging during the day. This often involves feasting on carrion. Females build stick nests in trees and they use these for several years. They lay about 5 eggs in a clutch and it takes around 18 days to hatch. 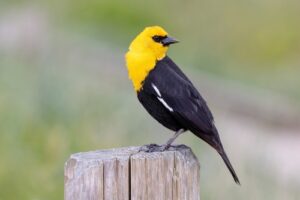 Michigan is the easternmost edge of a yellow-headed blackbird’s range. You can see them best in the autumn and spring, during migration. The males have distinctive yellow heads and chests with a pitch black body. Juveniles and females have dulled yellow heads with dark brown bodies. 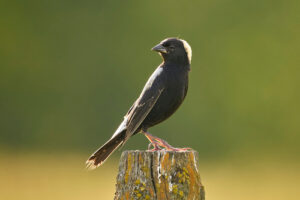 Often seen during migration in autumn and spring, bobolinks are famous for their long-distance migrations to Central and South America. Male bobolinks are mostly black with a cream-colored cap along with white patches on their back and wings. Juveniles and females are brown on top with a paler yellow shade on the bottom and they don’t have any white patches.

They breed in the northern parts of Michigan during the spring. The males initiate mating by hovering and singing loudly, with the intention of attracting many females to establish nests. Females lay about three to seven eggs and it takes about 10 to 13 days to hatch. 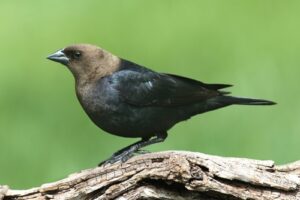 Another popular black bird in Michigan is the brown-headed cowbird. The curious thing about these birds is their habit of laying eggs in other birds’ nests, also called a brooding parasite. Males have iridescent black bodies and chocolate brown heads. Females and juveniles have a mousy grayish-brown color.

You can see brown-headed cowbirds in Michigan all year. But, they migrate outside the breeding season to forage together for food. They do this alongside other blackbirds and starlings. 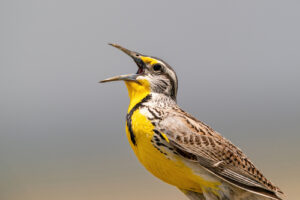 Western meadowlarks aren’t entirely black, but they are technically a blackbird species, making them one of the top 15 popular black birds in Michigan. They are difficult to spot because they love to hide. However, western meadowlarks have a bright yellow breast with a V-shaped black band.

Birdwatchers love observing western meadowlarks because of how the males sing with a brilliant flutelike melody while flying over its territory or from a perch. There are about two females per male during mating season and both parents help raise the hatchlings. 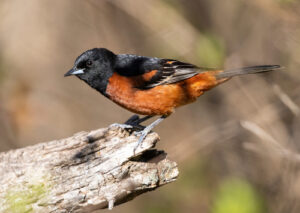 The orchard oriole is a summer visitor to southern Michigan and is one of the first to leave once autumn arrives. These are monogamous birds, producing several broods throughout their time together. However, they are the smallest oriole in their genus.

The females and juveniles are dull yellow but the females in particular are an olive color on top with a bright yellow shade below. The males sport a striking bright orange with black head, wings, tail, back and throat. Both genders have white edging for flight feathers.

While considered a rare vagrant in the summer months, bullock’s orioles visit Michigan regularly. The males are jet black with flaming orange and large white patches on the wings. Their orange faces are striking against their black necks. While juveniles and females have orange on their faces and chests, they are more grayish-yellow.

They love foraging for food on the upper sections of shrubs and trees in their favorite habitats. You can often spot them in open woodlands near streams, rivers, parks and orchards. They find these areas suitable for their seasonal monogamy during mating. 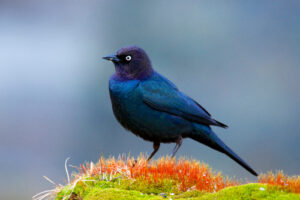 It’s very rare, albeit not uncommon, to see a brewer’s blackbird in Michigan while migrating through the state in spring and autumn. The males are entirely black with a purple sheen head that fades into a greenish color. Juveniles and females are a uniform brown color.

Brewer’s blackbirds have long tails and legs. But, when resting on a branch or the ground, their tails give an appearance of being broad and round. They congregate in huge flocks during the autumn months, feeding on leftover post harvest grains on farms. 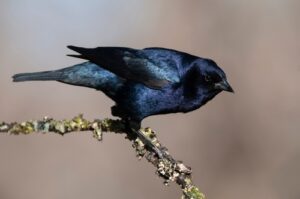 An extremely rare Michigan vagrant, shiny cowbirds are very adaptable. This blackbird species has a glossy purple sheen, giving their black feathers an iridescent aesthetic. Their eyes and beaks are also black but juveniles and females have a light grayish brown color.

These are also brood parasites, laying eggs into other nests and not ones they build themselves. Once hatched, however, the young leave the host nest within two weeks. Shiny cowbirds feast on insects and small invertebrates in the summer but eat seeds during winter.

While this list of 15 popular black birds in Michigan is comprehensive, there are others to explore. All of these birds are fascinating and fabulous in their own right. How they reproduce and migrate throughout the state is also interesting, teaching us about the truth of nature and their envious ability to fly freely through the air.

Each blackbird mentioned here offers something special and unique to the ecosystem. Indeed, as you’ll learn in further research on each, they are important to humanity and people are essential to their survival. It’s a beautiful relationship we can all participate and cherish in.